One of life's little pleasures

There's the most complicated recipe of all, from Daniel Boulud, French chef turned American business phenomenon, which calls for a quite absurd number of eggs (nine, in all – for six people).
Whip a pint of double cream to soft peaks, and melt 225g dark chocolate. Meanwhile,  heat 60ml water and 150g caster sugar in a pan until it reaches 115C, the 'soft ball' stage, and beat together 6 egg yolks and 3 whole eggs until thick and pale. By this point, you will have used every bowl in the kitchen, and when the digital thermometer beeps to alert you to the fact the syrup has reached temperature, You will react with a wildness unwise in someone dealing with molten sugar. ... This is an extract from Teh Telegraph

So tonight ,Saturday night we had some very nice steaks from Mr Waind's Butchers of Kirkbymoorside . I had hoped that Jack would have been satisfied with that but I could see the look that said where was the pudding . I noticed a bar of Aero in the kitchen which I was savouring and stretching it out through my time of lock down had almost gone. So opening my mouth before I thought and then hoping he wouldn't say yes when I asked did he want some chocolate  pudding.  The eyes lit up like a child's so just when I want to catch up with my tomato plants and see what else had lived or died in the summerhouse I set on to make a chocolate mousse.
Chocolate to put in the microwave to melt I remember Kala King's instructions of only a minute, stir it and then another 30 seconds and so on as the last thing you need chocolate is to burn. So I had separated my eggs and was ready to whip the whites up .I got distracted watching a deer through the kitchen window . I picked up the bowl to put in the microwave and set it off . I then reached for the bowl of egg white to whisk or so I thought . I had put the wrong bowl in the microwave. I quickly took it out and started to whisk the eggs up ... Needless to say it didn't have the usually effect ..maybe due to be it a shade cooked and warm . What the eye doesn't see the heart doesn't grieve. Anyway Jack hasn't a clue how to make a meal so words would only have fallen on deaf ears if I had tried to explain. Anyway it turned out well in the end and it is all eaten now . This is what I gave Jack, mine by this time I really couldn't be bothered to tart it up and knowing my luck a bee would have followed my viola and I would have got stung .So ate it straight out of the bowl with the cooking spoon. Saved on washing up if nothing else.
My chocolate mousse was quick to make approximately 8 minutes tops with trimming . If you try Raymond Blanc's he says 2 hours as prep time . Maybe I should tell him there is an easier way 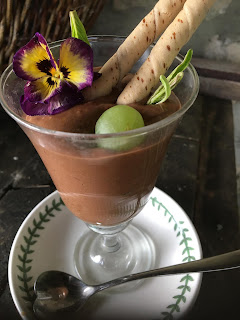 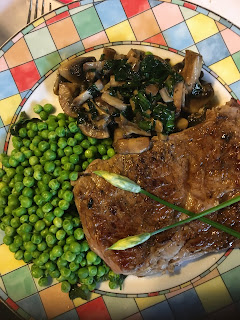