No I haven't been rolling bread in the grass  As damp is usually associated with damp weather or when the dew falls on the grass .. it gets damp. .Sorry this is what becomes of being a farmers daughter and my interpretation of damp.


If you read my blog last night you will know of my love of cookery books. I have run out of space in the usual places you keep books and have resorted to keeping them under the bed. So it is like take your pick when I reach down and rattle about trying to find some suitable night time reading.
I pulled one out and as I scanned the pages I found a recipe for Damper bread. I had never heard of it before. A photo of it being baked in a flower pots lead me to have a go at baking it. I thought if I do a trial run how nice it would be if it was a success and next time we have a long table party if each guest had set in from them them bread baked in individual plant pot.

The ingredients are minimum, flour, salt, butter, milk and water. Better still no yeast is needed .

I had plenty of plant pots to go at as only a couple of weeks ago I had been given some by Judith Almond. Her late father was Don Watson who along with his wife had run the flower shop in Helmsley many years ago.   I used to go with my Dad when I was very small, I can hardly remember, to  his garden nursery business in what is now the Helmsley Walled Garden to buy vegetable plants.
Don was a happy  man with rosy cheeks Judith has taken those genes on too. He used to wear a blue smock and in Summer a straw hat.  She has a lovely garden too with lots of very healthy looking herbs . She told me that as the Lockdown had made her have a clear out of plant pots she no longer wanted and  I had gone along thinking there was only 3 or 4 .She added they will have been there for years and  they would have been her Dads.  I am very sentimental so to have some of Don's plant pots meant I was holding on to a memory, a  bit of Helmsley as I knew it as a child. I can still smell the flowers as you opened the door and went down a step into the shop. It was always cool ,that would be to keep the flowers fresh . My Granddad used to buy huge chrysanthemum blooms which were wrapped up in brown paper which we took home on market day. They were put in the Chapel for the Sunday services and then my Grandmother took them home placing them on top of the piano or in the front window for all to admire .
Another memory of the family was of Mrs Don as she was known. She had been at a party and on Monday she took one of the other party goers to the doctors. The lady who remains anonymous  hadn't felt very well and had a rash, Mrs Don 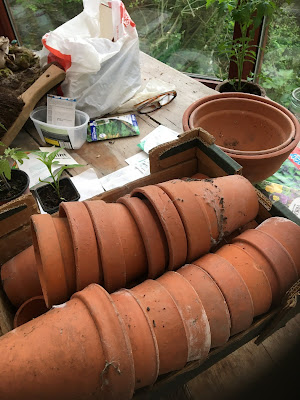 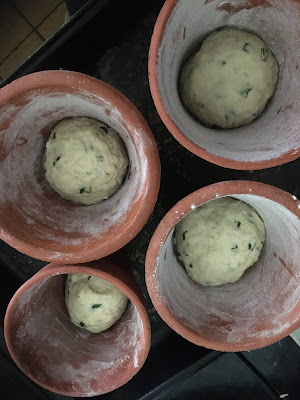 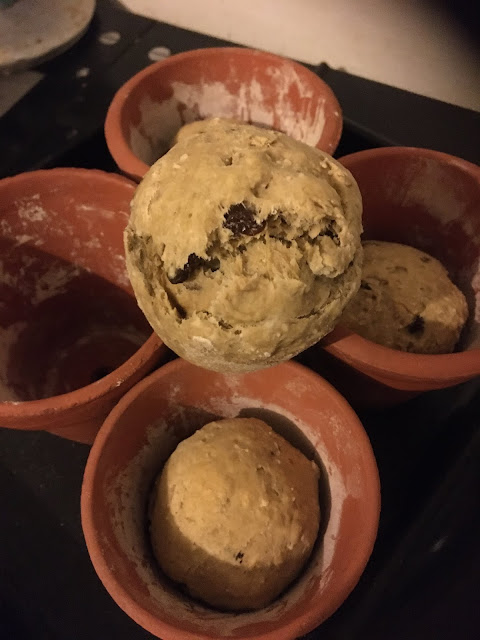 had thought was shingles. The young doctor had studied the rash and was rather baffled as he didn't really know what to  think. One of my Dads friends let the cat out of the bag. Apparently she had got so drunk and somehow she had landed on some cocoanut matting and didn't want to go home .So some of her friends decided to pull her up but they too had been quite drunk and pulled her across the matting which of course was very rough which had caused the markings around her middle..

Anyway back to the Damper bread I have done both sweet and savoury . My first attempt was with herbs out of the garden and extra wild garlic which is still in the woods despite it now flowering and getting over grown by nettles .The sweet I made with stewed rhubarb and sultanas. For the latter I didn't use as much liquid. Served up with custard Jack and my Dad liked it .

I liked the story of damper bread too .... Damper is a traditional soda bread, historically used for swagmen, drovers, stockmen and other travellers. It consists of a wheat-flour-based bread, traditionally baked in the coals of a campfire or in a camp oven
Posted by Anna Lupton at 20:03