My birthday isn't until the 23rd June. I was supposedly born on the most romantic day of the year, but as I was told about 25 years ago which I hadn't known till then, it was a full moon. The Summer solstice and the night of a thunderstorm  ...so  if you find me a bit weird  I will put it down to that.

When I was small my Dad used to ice my birthday cake. My mum wasn't the best cook in the world in fact she was not very good at all .My Dad could plough a field and bake a cake and my Mum certainly left the icing to him . I have had ponies on cakes, sweet peas, even a goldfish. We often use the same cards from year to year. I remember when I was 7, I got a card and I liked it so much  it had a horse on rather than a pony .It was a bay horse with black man and tail eating in a field full of buttercups.  I had it until I was at least 12 I just got an extra x[kiss] on it every year.  That is what saddens me about life today it is so materialistic . One year I got a goldfish ,one, not a whole tankful but it swan round in a glass bowl. In fact as June is a busy month on the farm and hay making is more important ,the year I got my goldfish, on the actual day I got a carrot in the shape of a fish and a stick. I think it was the wooden end of an old washing up mop as my Dad hadn't had time to go to Malton to get a fish for me. So I had to stir the water round very quickly to make it look as if the piece of carrot fish was swimming . Children don't throw wobblies in those days ,it was a day when the rest of the family sang happy birthday to you  as you blew out the "preloved" candles on the cake. You had to be quick as the candles had to be used by others on their birthdays too ....and you were grateful. People say Covid will have an effect on people make them realise what small acts of kindness are and how the world will change and people will be appreciative  . I really wish this was true but I can't see it.

Duchess our cat is 15 years old now as April past. She was born the day Camilla and Charles got married .We had the Duke too , Marmaduke, but unfortunately he died . And I know she may last another year or two, the cat I mean not Camilla, but a time will come when she is no longer here. I have being saying for a while I was wanting another cat.

So I was delighted on Friday when my Dad rang me to say he had got my birthday present. He had gone down after tea to shut his greenhouse up and there on the path was a kitten. it had appeared from nowhere. Farm kittens are usually wild and sizzle, unless you get them early. If the mother cat sees you looking she is crafty and will move them. But this one was so quiet and let my Dad pick it up .How he managed to get it up to the house and into a box I don't know, as he walks with two walking
sticks but he had.  We reckon it is about 3 weeks old as I knew one of the cat had some about 3 weeks ago and as much as I had tried to follow her to find out where they were she kept giving me the slip. And so now you can see  my early birthday present. The verdict is out on a name so maybe you can help . My Dad thought Felix, but I am sure it is a girl, but he said they always had a Felix . I had a Belinda when I was young and loved it until a cow laid on and killed it. Then I thought of Rose and Daisy... and I can't really just call it cat with no name 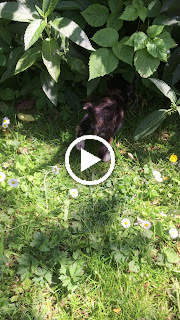 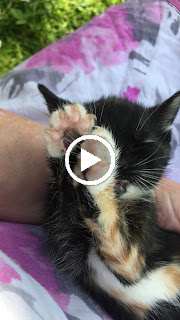 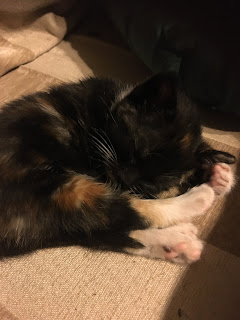