Sunday Musings on the Moorland Crosses 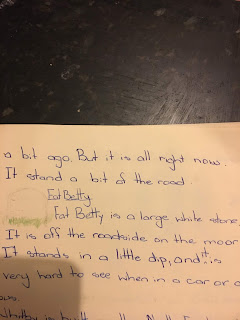 Firstly my view of  crosses, when I was a pupil at St Hilda's School in Ampleforth and went with the children from Nunnington school . I think I would have been 9 years old . We went over the Moors which we  called the North Yorkshire Moors in those days, but we must now call them North York Moors .This was my account of it . My spelling hasn't got much better as it should read "It stands a bit off the road". I am glad to say my drawing has got better. I Hated school and always wanted to be on the farm with my Dad and uncles  and it didn't help we had to do this write up  as we travelled [to keep us quiet I suppose] and I felt travel  sick on the bus .
The North York Moors account is far better and would take them to the top of the class .
The remains of stone crosses can be found across the moorland area of the North York Moors. They are such a particular feature of the area that the North York Moors National Park took Young Ralph’s Cross to be its emblem.
The survival of original moorland crosses is very variable – some only comprise the base or socket stones, whilst others appear more complete, although the latter may be due to modern repairs or replacement – such as Ainhowe Cross on Spaunton Moor which was replaced in the 19th century. There are different styles of cross-heads – such as wheelheads (White Cross and Steeple Cross) and the simple upright cross shafts with projecting arms (such as Young and Old Ralph, Mauley and Malo crosses) – the latter make up the majority of the surviving examples.

In the North York Moors the most relevant reasons for the original crosses seems to be as way-markers, boundary markers and memorials – potentially all three at once. For a Christian traveller coming across a symbol and reminder of Christianity whilst crossing the desolate moorland must have given hope and succour. Crosses may also have been erected by landowners to mark boundaries and as a good deed, or pre-existing crosses used as a local landmark to help define a boundary. The most famous memorial cross on the Moors is also meant to be the earliest – Lilla’s Cross – which is said to mark the burial site of the servant who sacrificed his own life to save that of his King, Edwin of Northumbria, in the 7th century AD. Although the surviving roughly cut Maltese cross is actually dated approximately to the 10th century AD.

After the Protestant Reformation in England, the cross came to be seen by some as a symbol of superstition and this led to the slighting and destruction of individual moorland crosses. This may help to explain – in addition to weathering and deterioration over hundreds of years – why so many crosses today are missing their upper shafts and cross arms.
Posted by Anna Lupton at 23:42