Was my eyes playing tricks in Lockdown ..or is it just a topsy turvy day again ...

So Sunday was a strange day today ... Jack wondered what I had done to his Yorkshire puddings .I had added mint to the batter rather than put it in the gravy.  I cooked him a dozen and my Dad and I share a dozen with a few left over for my Dads dinners in the coming days.
As I was coming back from the farm I looked across the field and  thought by gum them sheep look white .
In fact they are a flock of Meat goats called The Boer goat Jump to navigationJump to search

Boer goat, Doe
Boer goat kept as a pet
The Boer goat is a breed of goat that was developed in South Africa in the early 1900s and is a popular breed for meat production. Their name is derived from the Afrikaans (Dutch) word boer, meaning farmer.

They were probably bred from the indigenous South African goats kept by the Namaqua, San, and Fooku tribes, with some crossing of Indian and European bloodlines being possible. They were selected for meat rather than milk production; due to selective breeding and improvement, the Boer goat has a fast growth rate and excellent carcass qualities, making it one of the most popular breeds of meat goat in the world. Boer goats have a high resistance to disease and adapt well to hot, dry semi deserts as well as here in North yorkshire

Boer goats commonly have white bodies and distinctive brown heads. Some Boer goats can be completely brown or white or paint, which means large spots of a different colour are on their bodies. They possess long, pendulous ears. They are noted for being docile, fast-growing, and having high fertility rates. Does are reported to have superior mothering skills as compared to other breeds.
So if you fancy trying some goat meat to eat you can always call Wass Farm Shop  on 07779340799 or look on the Facebook page to see what they have on offer at the moment.
Today they were enjoying the sunshine and looking at the oil seed rape which is in bloom at the moment in the next field.
Where was the lone goat herder as the song goes. https://youtu.be/UmmOJx_Hxto
eating his Yorkshire puddings I suspect 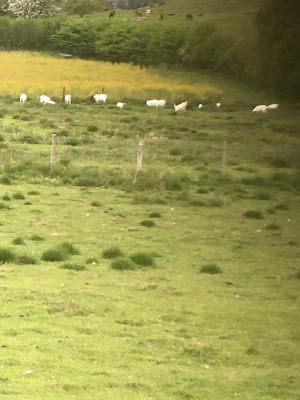