Just a little update on what is happening in my Dad's garden. I have been hoeing between his onion rows which was a harder job than I thought with one hand as I had an ice cream in the other. The rose bushes that were pulled off the trellis in the strong winds last weekend don't seem to look any the worse .In fact he counted over 50 blooms on it . The fuschia is looking glorious too . It has been there since  the year dot and however hard he hacks it back it always put on a good show .
We then went down into the green house and I dug some potatoes up for our dinner tomorrow. Yes it's Sunday again tomorrow and so it will be Yorkshire puddings.
The grapes are coming along nicely and all the fruit is formed in not much more than pin heads but it looks like a good crop. they tend to get mildew some years for whatever reason. My dad likes to dry a few bunches of grapes too so he can eat them in the form of raisins . I have yet to put some in a cake but maybe if I remember I will have a go later in the year.

It was a bit cooler this evening but my tomatoes at home are growing in leaps and bounds and so I have been busy staking some more up and tying them to the handles on the summerhouse windows .It is only as I type this now I wonder if I need a window open I will have to change the ties but it is dark now as it is gone 11pm.
But look at my first tomato, it is about as big as a marble. They are a bit leggy as I started to feed them with tomato feed as soon as I planted them. Father being the expert ,he  said you only feed them when you get fruit formed on them .. oh well ... . I also gave a splash to the lemon tree which after it's visit to Brown Nursery at Wiggington on the way to York  for professional guidance I am relieved to say it is sprouting new shoots 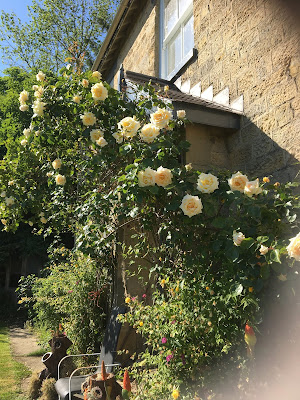 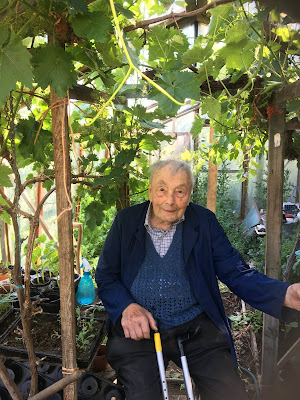 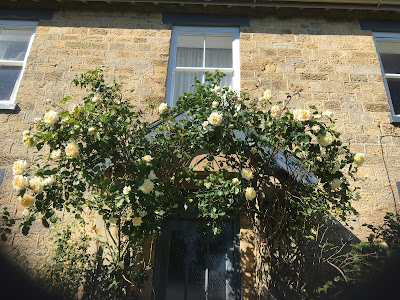 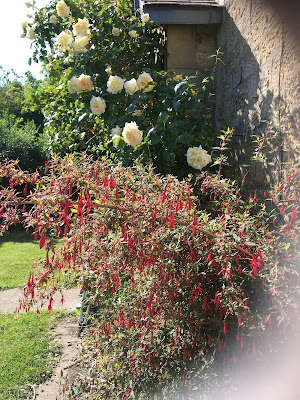 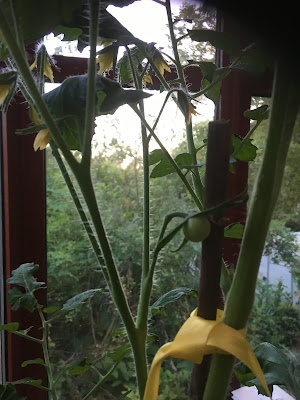