We usually see woodpeckers on the bird table - the black and white one which have a flash of bright red on them ... a bit like the red lipstick I used to wear, No 14 by Chanel ,which they don't make anymore . That makes for another story.

But we will stick to the greater spotted woodpecker that graces our garden. In winter we see a pair regularly. Guests  eat their breakfast  roughly the same time as the woodpeckers come to have theirs. You have to be very quick to get a photo of them and not too near a window ,but they come as regularly as clockwork. Now the garden is buzzing with them as they must have again hatched off a brood. They come like day trippers for a quick wizz round. The lockdown doesn't worry them as they are very timid and quick they self social distance whereas the robin,sparrow and blackbirds nearly eat out of your hand. I think it is their colouring that makes them look so exotic. If you don't see one, you will not be long before you hear one.
I looked it up on Wikipedia.. and they call it drumming we call it tapping .Quite like a pneumatic drill at times. You can't believe such a little bird makes such a  big noise in the trees which surround the house. I have any idea where the nest is based as they always seem to head home in the same direction sweeping around the end of the house. It is in one of the Poplar tree plantation to the north of the house. The Poplars are a great height now but if we have the North winds they shelter us from them. We had one brach leaning too far over for my liking so last week when the men were here taking the ash tree down the young lad went up and took a limb out for us. I didn't want to get squashed by it as i needed the hot tub to be moved nearer the the east side to get more sun as the trees to the west block out the sun far too early in the day. The hot tub does get very hot as it is fueled by logs and I keep stoking it up . Had it up to 104 degrees one summer and felt pretty wobbly when I got out. Now you think oh ...hot tub let me explain it isn't your usual hot tub it is my hot tub built to my specifications . It is a 150 gallon cattle trough which has been fitted with a coil pipe which as it gets hot by burning logs around it heated the water up inside and works on hot water rises and has it comes out of the pipe the cooler water circulates .
So tonight we have woodpeckers, poplar trees and water tubs  so you can see how my mind works most of the time 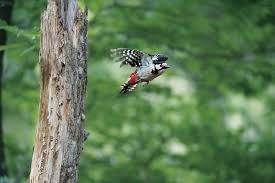 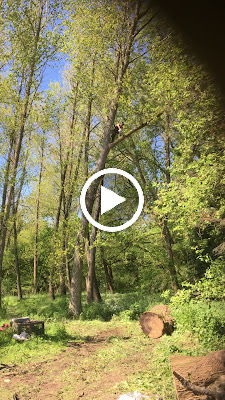