Showing me how it is done

I must say say I dont get the same pleasure from gardening as my Dad does. As he approached his 98th birthday he is quite happy to accept a bit of help in the garden and as it is this Coronavirus lockdown time his friends that would normally lend a hand aren't allowed to come .So it leave me. It is more of a toil than a pleasure but i would rather do things for my dad when he is here as cry when he isn't.
He grows most things from seed and today it was time to plant the onions out . He had already planted a row before I got there.He has planted over 200 now and so here you see him taking them out of the seed trays and putting them in a bucket ready for me to pop in the hole . He uses his walking stick to make the hole but before that he paddles up and down the row so that it makes the ground firm so that the soil doesn't drop down and fill the hole before he pops the onion plant in . he entrusted me to plant the second row but insisted on filling them in with the soil himself as he thought I might just not get it right. Then it was into another garden to how his other onions and between his strawberry plants and turf some prize dandelions out .
He had already been to take some potatoes up from the green house. Wonder if he has beaten his mates to having the first new potatoes of the year . I pulled the mint and it will be him that cooks them There is no way he would entrust me to cook the perfect new potato. And new potatoes definitely want cooking with some mint. I forgot to mention the peas are coming along well. You can see the prize dandelions before I hoed them up .
Dad added a tip if you think your onion sets have got a bit too leggy before you plant them out you need to cut the tops off with a pair of sharp scissors as if you try to nip them off as I did the first one I picked up you bruised the whole plant it it will rot off. 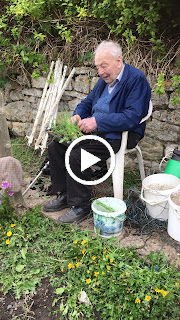 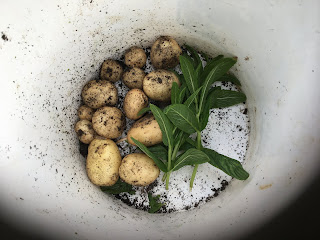 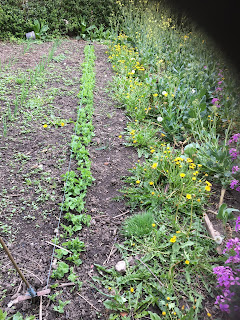